"Give time a break.." Puducherry(formerly  Pondicherry)  is a Union Territory of India. It is a former French colony, consisting of four non-contiguous enclaves, or districts(, and named for the largest, Pondicherry.

The capital city of this union territory is Pondicherry. It covers a total land area of 492 Square Kilometers. The population of this town is 9,73,829. The main languages spoken here are Tamil,Telugu, Malayalam, English and French. There are four districts which comprise this territory namely Pondicherry, Karaikal, Yanam and Mahe. The best season to visit Pondicherry is between July and February. This town is connected by airways, by railways, and by roadways. Pondicherry is a peaceful city. Pondicherry is referred by names such as ‘Quintessence of French Culture’, ‘India’s Little France’ and ‘The French Riviera of the East’.

This territory was under the French rule for nearly 281 years. Still it has the French flavor in it as one can see by the grand colonial mansions, beautiful boulevards, and placid promenades, spellings on sign boards and buildings, names of roads and public places. 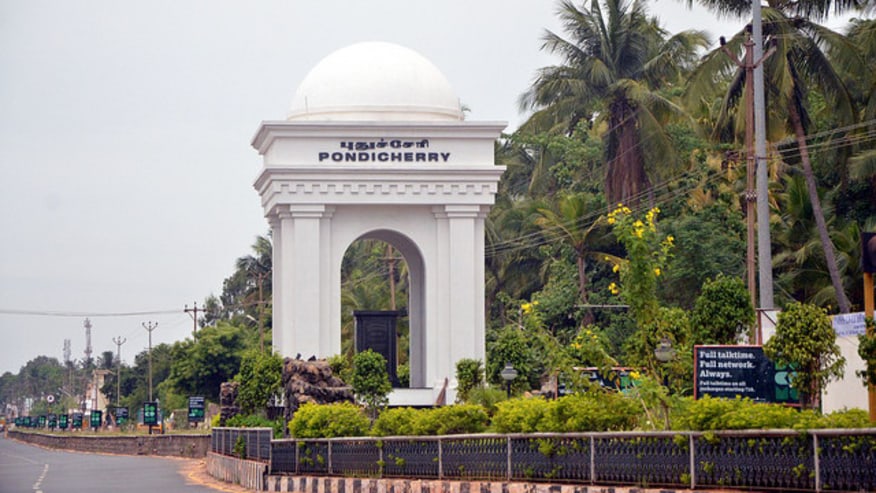 Pondicherry is a well planned and well built town. This is a typical example as one can learn the way the French people gave importance to order and flair. They are known for their rich and quality living. The French too had an eye on the wealth and the fertility of India. Thus the French dream of Indian empire began and got over by establishing their supremacy in Pondicherry. The French constructed many buildings based on their craft and grand architecture. They developed an oval shaped, lovely ‘boulevard town’ – the French quarter. This French quarter was laid out in a geometric grid pattern with straight roads intersecting at right angles. A boulevard encircled the town and a grand canal, divided it into two sections- one the Tamil side called as Ville Noire or the black town and the other, a European side which was known as Ville Blanche or the white town. The impressive Ville Blanche or white town resembles a typical Medieval French township clotted with fine built monuments, government buildings, majestic mansions, elegant churches and lush green parks.

This unique union territory, Pondicherry comprises of four scattered coastal enclaves-1.Pondicherry now called as Puducheri, 2. Karaikal which is in Tamilnadu, 3.Yanam in Andhra Pradesh and 4.Mahe in Kerala which lies on the west coast. These places have preserved the French heritage and its cultural aspects which are unique in India. Pondicherry is a combination of cultures. The people here speak about 55 languages. The natural beauty mesmerizes and influences the visitors. People who love to go for shopping can select Pondicherry as goods in this town can be bought for cheaper prices and the shoppers can bargain and pay the minimal charges for goods to their satisfaction. The golden sea shores, the exclusive sunset cruises, the enchanting moonlit dinners and the blissful lagoons have given the lovely resort a reputation of being the most appropriate place for those in quest of a relaxed and leisurely holiday. Bicycle is the best mode of transport for moving around and visiting the beauty of Pondicherry.

Pondicherry was a French colony till 1954 when it became part of the Union of India. The French influence is still very evident in the region. Many French citizens still live in the town. A French consulate functions in the town.

The entire town is divided into the French quarter and the Indian quarter. The French influence is still present in the layout of the town. It is perhaps the only town in India where the numbering of houses is done in an peculiar way; the even numbers are on one side, and the odd numbers are opposite. French is still one of the official languages of the town along with Malayalam, Tamil, and Telugu

Pondicherry is one of the most popular tourist destinations of South India.Thecity has many colonial buildings, beautiful temples,churches, and the unique French ambience, evident everywhere, present a wonderful experience to the tourist.

The must-see places in Pondicherry include the four beaches in Pondicherry: Promenade Beach, Paradise Beach, The Auroville Beach,and the Serinity Beach. The other places include the Aurobindo Ashram and Auroville, a small township situated about eight kilometers from the town. Auroville is meant to be a universal town where men and women from any nation,caste, and beliefs can live in peace and harmony.

Pondicherry can be easily reached from Chennai by driving along the coast on the scenic East Coast Road. It takes about three hours to reach Pondicherry from Chennai. Accommodation and food is available at the ashram. Prior booking is a must