The term “in vitro”, from the Latin root meaning in glass. Yes, it is a process within egg cells are fertilized by sperm outside the body: in vitro (in a glass or test tube). IVF treatment is one of major and effective treatments in infertility when other methods of assisted reproductive technology have failed. The stage of treatment involves hormonally controlling the ovulatory process, removing ova (eggs) from the woman’s ovaries and allowing sperm fertilize them in a fluid medium. The fertilized egg (zygote) is then passed to the patient’s uterus with the intent to establish a successful and healthy pregnancy.

Test tube baby procedure is mainly used to beat female infertility in the woman due to problems of the fallopian tube; it may also help in male infertility, where there is deficiency in sperm quality. But don’t be panic- a group consisting well equipped and specialized doctors and nurses are here at Srishti to rectify the problems of every patients with utmost care. Methods of Treatment 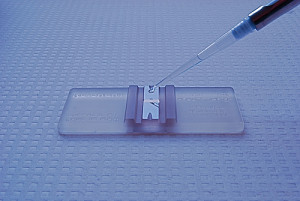 In order to boost-up IVF process there are two main protocols to stimulate the ovary. The long protocol involves down regulation (suppression or exhaustion) of the pituitary ovarian axis by the prolonged use of a GnRH . Following ovarian hyper stimulation, typically using follicle stimulating hormone (FSH), starts once the process of down regulation is complete, generally after 10 to 14 days. Whereas the short protocol jumps over the down regulation, consist of a procedure of fertility medications to stimulate the development of multiple follicles of the ovaries.

When the ovarian follicles have reached a certain degree of development, final maturation is stimulated, usually by an injection of human chorionic gonadotropin (hCG). This is commonly known as the “trigger shot. Then, hCG acts as an analogue of luteinising hormone, and ovulation would occur between 38 and 40 hours after a single hCG injection, but the egg recovered is performed at a time usually between 34 and 36 hours after hCG injection. This is just prior to when the follicles would split. This avails for scheduling the egg recovery procedure at a time when the eggs are fully mature.

The treatment continues in the laboratory, the identified eggs are uncovered from surrounding cells and prepared for fertilization. An oocyte selection may be performed prior to fertilization to select eggs with best chances of successful and healthy pregnancy. At the same time, semen is made ready for fertilization by removing inactive cells and seminal fluid in a process called sperm washing. If semen is being provided by a sperm donor, it will usually have been prepared for treatment before being frozen and quarantined, and it will be soften to use.

Culture of embryos can either be performed in an artificial culture medium or in an autologous endometrial co culture (on top of a layer of cells from the woman’s own uterine lining). With artificial culture medium, there can either be the same culture medium throughout the period, or a sequential system can be used, in which the embryo is sequentially placed in different media. For example, when culturing to the blastocyst stage, one medium may be used for culture to day 3, and a second medium is used for culture thereafter. Single or sequential medium are equally effective for the culture of human embryos to the blastocyst stage.

There is a grading method developed by the laboratory to judge and select the Embryo quality. In order to have best output on pregnancy rates, it is clearly visible that a morphological scoring system is the method for selection of embryos.

The Embryologist select the embryos based on the number of cells it possess, The age of the woman and other health and diagnostic factors would depend the number available in the cells.